Sinusitis (rhinosinusitis) in children can look different than sinusitis in adults. More often, children have a cough, bad breath, crankiness, low energy, and swelling around the eyes, along with a thick yellow-green nasal or post-nasal drip.

Most of the time, children are diagnosed with viral sinusitis (or a viral upper respiratory infection) that will improve by just being treated for its symptoms, but antibiotics can be considered in severe cases of bacterial sinusitis.1 In the rare child where medical therapy fails, surgery can be used as a safe and effective method of treating sinus disease in children.

Your child’s sinuses are not fully developed until late in the teen years. Although small, the maxillary (behind the cheek) and ethmoid (between the eyes) sinuses are present at birth. Like sinusitis in adults, pediatric sinusitis can be difficult to diagnose because the symptoms may be caused by other problems, such as a viral illness or allergy.

What Are the Symptoms of Pediatric Sinusitis?

The following symptoms may indicate a sinus infection in your child: 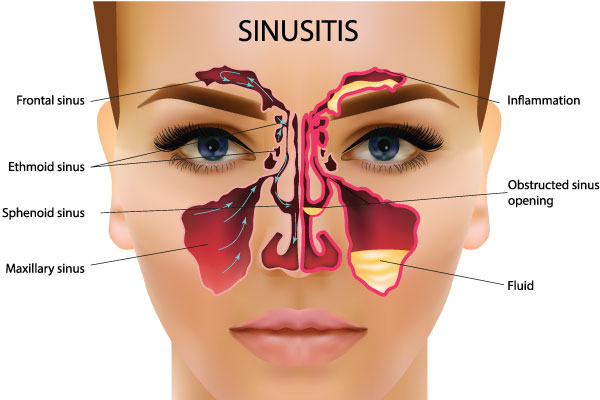