Young children experience more ear infections than adults because the main ventilation tube for the air pocket under the eardrum (the eustachian tube) is immature, and predisposes them to develop ear infections instead of preventing them.  The eustachian tube connects the ear to the back of the nose and is what “pops” when you yawn, sneeze, fly, etc.

What are Ear Tubes?

Ear tubes (i.e. tympanostomy tubes or myringotomy tubes) are small pieces of plastic or metal that are placed through the eardrum to ventilate the space underneath.  They prevent fluid from building up under the eardrum and provide better long-term control of ear infections than antibiotics alone.

Ear drainage with tubes is uncommon, and its appearance usually means an ear infection is present. Pain, fever, and irritability are usually not seen with ear infections with tympanostomy tubes.  Antibiotic ear drops are often all that is required to control ear drainage.

How involved is having tympanostomy tubes placed?

Placing tympanostomy tubes is done in the operating room and takes about 5 minutes of anesthesia (usually with only a mask).  Most children are ready to go home 15 minutes after the procedure is complete, and are normal by the end of the day.  While activity is not restricted after tympanostomy tube placement, earplugs or swimming plugs are recommended with exposure to untreated water (lake, river, ocean, etc).

What’s the difference between tympanostomy and myringotomy?

Myringotomy is the primary procedure to resolve chronic ear infections. However, the surgeon may perform a companion procedure called tympanostomy. With tympanostomy, the surgeon inserts small tubes into the cut created by myringotomy. The tubes allow excess fluid to drain out of the middle ear 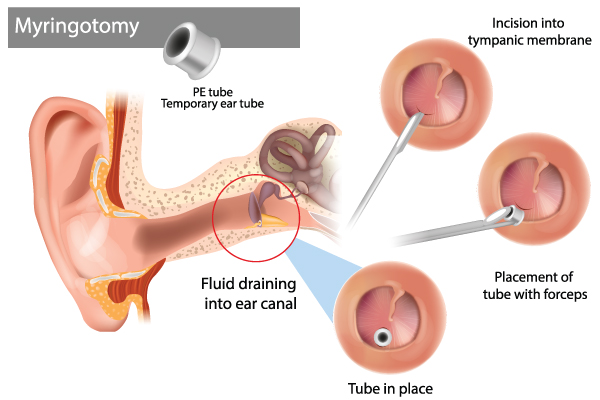