The most common symptom of a deviated septum is difficulty breathing through the nose. The symptoms are usually worse on one side, and in some cases, the drainage of the sinuses is curtailed and results in repeated sinus infections.

Septoplasty is a reconstructive plastic surgery performed to correct an improperly formed nasal septum. The procedure is performed entirely through the nostrils. During the procedure, badly deviated portions of the septum may be removed entirely, or they may be readjusted and reinserted into the nose.

In addition to correcting a deviated nasal septum, septoplasty may also be performed to correct other problems such as cleft lip/palate defects that affect the nose and nasal cavity and a fistula in the maxillary sinuses.

Oftentimes, septoplasty is not completed until the teenage years due to growing facial bones.

The surgeon will provide guidelines for resuming normal activities. Many children are up and around within a few days and able to return to school in a week or so.

What are the complications associated with nasal surgery?

Children vary greatly in their anatomy and healing ability, and the outcome is never completely predictable. Complications may occur, including, but not limited to, infection, nosebleeds, or reaction to the anesthesia.

What are the short-term side effects of nasal surgery?

The following short-term side effects may occur. If symptoms do not subside, consult your child’s physician.

Healing is a slow and gradual process. Some swelling may be present for months, especially on the tip of the nose. The final results of nasal surgery may not be apparent for a year or more. 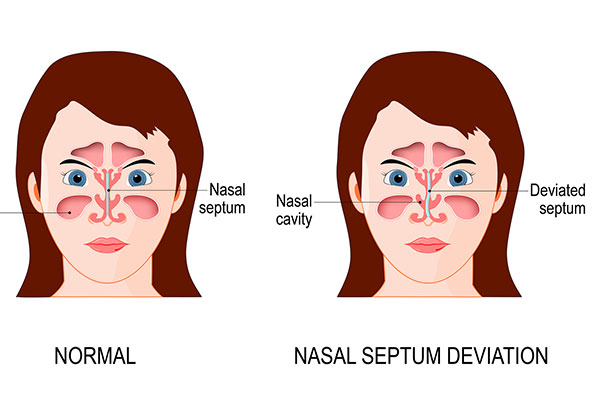