Foreign bodies in a child’s ear canal are common conditions seen at our Pediatric ENT practice. Children often try to insert objects into their noses or ears. While many foreign bodies are not an emergency, batteries in the ear canal are very serious.

Upon examination, the provider will ask about the length of time the foreign body has been in the ear canal. Objects such as rocks, beads, and jelly beans generally do not cause pain and may be easily removed by your doctor. Things that can swell inside the canal, such as popcorn or beans, may cause pain and require a visit to our practice.

A Pediatric ENT Provider has the appropriate equipment to visualize and remove the object. It may be necessary to remove the object under anesthesia to prevent eardrum or canal injury on rare occasions.

NEVER flush the ear canal. Flushing may cause injury to the canal and eardrum or trap water behind the object. Flushing water may push the object further toward the eardrum or cause the object to swell and cause pain.

Insects can end up in the ear canal. They can cause immediate distress to the child and parent by scratching or biting the canal, making noise, and causing anxiety. The insect should be removed as quickly as possible by a Pediatric ENT provider.

Ingesting or placing any small “button” battery in the ear canal, nose, esophagus, or stomach is an emergency. These small batteries can quickly cause tissue damage and burning and need urgent treatment. Children should not have access to batteries found in hearing aids, watches, car remotes, and other items. 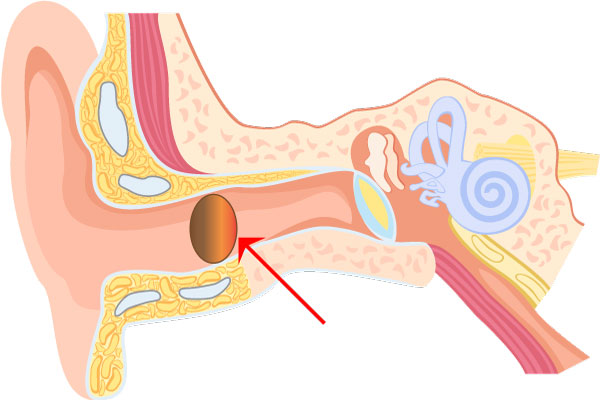